On protecting and serving during a pandemic, GoTriangle mechanic leads the charge 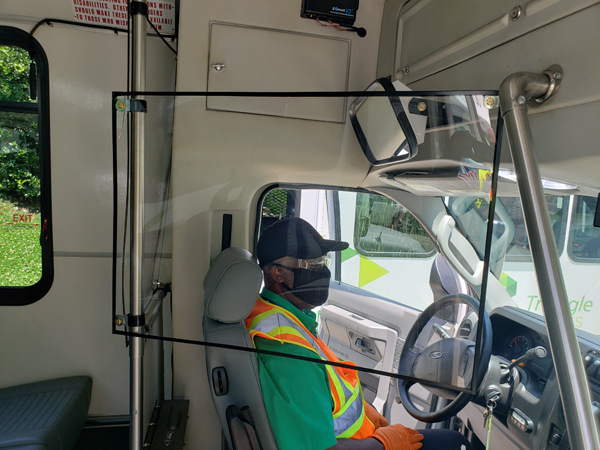 RESEARCH TRIANGLE PARK -- The new coronavirus was just beginning to advance on North Carolina in early March when GoTriangle Paratransit Manager Tammy Romain approached Maintenance Supervisor Darrick Harris with a question: “Can you build a shield to help protect passengers and operators in GoTriangle paratransit vans?”

GoTriangle’s paratransit vans transport many elderly passengers – a group shown to be especially vulnerable to the virus – and they have to pass near operators to enter or exit the vehicles. Additionally, the seats are relatively close to each other, so the request was urgent. Operators wanted protection for their passengers and themselves.

With no experience in design, Harris immediately set to work, using what few supplies he could find in a market already in short supply of protective materials – such as Plexiglas – to create prototypes. With help and suggestions from a team of Transit Operations staff ranging from operators and mechanics to managers, a new shield made of Plexiglas was deployed in 20 paratransit vehicles by the first week of April.

“We all had to come together to get this going, not just in the installation but in the development as well,” say Harris, left. “We put our heads together to see what works, where we can get this part from, how we can do this, and that’s what I’m very grateful for. Everybody got together, and we made this happen.”

By the time GoTriangle installed the shields, manufacturers were just beginning to market new protective devices, says Brian Mclean, manager of GoTriangle’s fleet maintenance, who juggled schedules so that eight mechanics were available to install the shields over three days.

Creating the right design took several attempts. One difficulty was needing to shield operators of varying sizes from the chest up while giving them access to their tools and the van controls. Some of these – like air-conditioning and heating, and the computer tablets with route instructions – were well beyond the steering wheel. Allowing operators full visibility inside and outside the van was a must, but the shield also needed to be non-intrusive for visually impaired passengers who navigate by touch. And in the event the van was involved in an accident, it had to be safe.

“There were a lot of things you had to factor in to try to get this thing to work,” Harris says. “If you think about it initially, you’d be like, ‘It’s simple – just put something around the driver and you’d be good.’  But then, you start to see ... it’s not that simple.”

Once operators and managers approved a design, Harris installed a shield on one van and asked an operator to test it on the road. She returned with a mostly positive review and one request: Could he ensure better visibility through the shield?

After brainstorming with a team of maintenance employees newly dedicated to the task, Harris reconfigured the design. When he headed back to stores, however, the large sheets of Plexiglas he needed were sold out, so Harris had to update his design yet again to use pre-cut pieces.

Asked how he was able to lead the project to fruition without the benefit of professional design training, Harris laughs.

“I’m an automotive technician,” he says. “I love working my hands. I love building things and making things. I love challenges, and that was kind of how it was put to me – as a challenge, and I love trying something to come up with it and making it work.”

Harris, who began working at GoTriangle in December 2006, likes to tell people that he doesn’t like working here – he loves it! 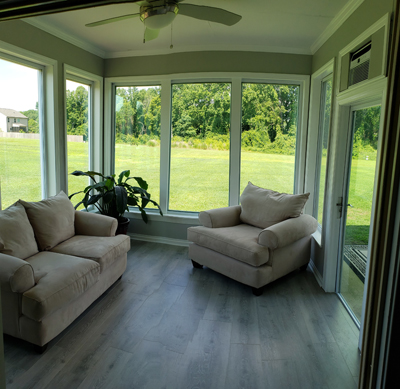 Harris’ love of challenges extends to his home life as well. In March, just as he took on the task of designing the shield, he was completing construction of a sun deck, a project he had always aspired to tackle solo. Along the way, he says he almost called in a professional but kept going, learning about himself in the process and winding up with a beautiful room.

“There were times where I wanted to quit,” says Harris, who relied on a lot of do-it-yourself YouTube videos. “I had to learn as I was going along, so it was frustrating. But when I put that last piece of board down, I had a smile on my face. … And the fact that I did it myself, the gratification in that was just humongous.”

With two major projects under his belt, Harris has no plans to rest. As a supervisor of maintenance, he’s ever vigilant, and he realizes the shields he designed might require yet another iteration to make them more permanent.

“At the time, I had no idea what this pandemic was going to blow up into,” he says. “I always thought this would be a temporary thing, maybe a couple of weeks. But now it’s seeming that it will be on for a while. So actually we need to readdress this barrier because this is something that will be ongoing.”

Whether GoTriangle team members are operating a bus, planning the routes, working on carburetors or computers or getting the word out about all of the benefits of transit, each person plays a critical role in how well we serve our community. Join Darrick at GoTriangle with a career that works for you. Learn more at gotriangle.org/careers.